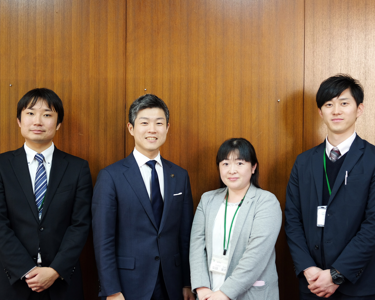 Shijyonawate city, located in Osaka, used LINE WORKS’ video call feature for employee recruitment to provide interview opportunities for applicants in diverse living conditions, such as those who are on childcare, who are working full-time, or long-distance candidates. As a result, the number of applicants has increased significantly, drawing attention from local governments suffering from labor shortages across Japan. We interviewed Mayor Azuma, Arahori and Azuma from the Department of General Affairs to learn about how the interviews were conducted with LINE WORKS, and also how the communication tool was useful for the administrative agency.

Tell us about Shiyonawate City and your individual roles

Located in the north-eastern side of Osaka Prefecture, Shijonawate takes up a relatively small area of 18㎢, and is home to about 56,000 citizens. Around two-thirds of the city’s area is Mount Ikoma and is rich in green areas; it is also located in 15 minutes distance by subway from Kyobashi station, one of the main stations in Osaka. Taking office in January 2017, I am the mayor of Shijonawate.

I am in charge of hiring and salary related matters in the Department of General Affairs, Human Resources. When we were conducting video interviews in the recruitment process, I was involved in examining various tools, and also introducing and operating LINE WORKS.

Likewise, I am in charge of recruitment, salary, social insurance, healthcare and other related work in the Department of General Affairs, Human Resources. I was one of the interviewers during the video interview process.

We’ve heard that since Mayor Azuma took office, Shijyonawate has focused on introducing IT to administrative services

We introduced a system that enables citizens to report road defects through LINE@ and conducted employee interviews online, for the first time in Japan, but I do not mean to say that ‘IT is the best.’ Introducing IT was just a result of seeking which was better from a reasonable point of view. And while the premise is to make Shijyonawate a better place through these new initiatives, I do not believe that it has to end here. Shijyonawate will set a precedent by introducing IT and advanced systems, making it easier for other local governments to implement them. So under the belief that Japan as a whole will thrive, we are actively introducing new technologies and systems.

To secure talented personnel we want as many people as possible to apply for the interviews—but recently, the administrative sector has also been suffering from labor shortages. When we were recruiting a deputy mayor in 2017, we tried conducting online interviews through collaboration with a private website specialized for people who want to change jobs, so that people living far away could participate without having to come a long way. This resonated with our city, and as a result we decided to conduct face-to-face interviews and video interviews at the same time for the 2018 summer employee recruitment, introducing new tools for online interviews.

After reviewing various communication tools for businesses, we decided that LINE WORKS is the best option because it is easy to use due to its similar interface with LINE, a service familiar with the general public, and because its security is guaranteed. One of the reasons for introducing LINE WORKS was because it has catered to our request that we would like to use the service only for a limited amount of time since we only use it for video interviews—in this way, we could cut down operating costs.

Please tell us about the video interview system using LINE WORKS, and some of the measures that were taken to guarantee security

We gave LINE WORKS accounts to applicants who had wished to have a video interview, via email before the interview. We used account names registered in LINE WORKS for candidate number to prevent personal information from being leaked. Moreover, we had to make sure that applicants would not reach each other through the network, so we used LINE WORKS’ function for access restriction to prevent searches for other accounts in ‘Contacts,’ and strengthened security.

During the interview, we checked identification by asking the candidates to show their driver’s license or verification slip delivered via email on the video call screen, and could carry on with the interview without an issue.

On the day of the interview, we prepared PC, camera, and a projector in designated areas in the city hall, and conducted video interviews by calling the applicants with our PC. As we had carried out test calls with every applicant in advance, there weren’t any problems like screen impairments or network errors, and we could carry out same quality interviews as face-to-face interviews.

What kind of effects did you achieve by conducting video interviews?

29 people applied for the 2017 summer office staff recruitment; but for the 2018 summer recruitment where we carried out video interviews, 213 people applied, and we could feel its effectiveness by the seven-fold increase in the number of applicants. I think we were able to provide a more accessible environment for people to apply.

It would be great burden for people living far away to spend time and money to take an interview multiple times; and it’s not easy for those on childcare or working full-time to schedule job interviews. In the past, there was an applicant who had to give up on the interview because her child suddenly had fever. Hearing from applicants after the interview, we realized that many of them would have given up applying if the interview were not conducted online.

Many people took interviews in their own homes, but there were applicants who took interviews in a car, park and school. We realized that people from diverse backgrounds applied for the position. We believe that the significant increase in the number of applicants is a result of providing opportunities for applicants without spatial constraints.

How would you like to use LINE WORKS for job interviews in the future?

In 2018 winter employee recruitment, we conducted video interviews not only for office workers but also for professionals—and because a lot of people applied at that time as well, we plan to continue conducting video interviews. Our city advocates “The most convenient local government to apply for in Japan” on our website, and we will continue to spread the convenience of video interviews. I hope more people will be interested and send applications.

Labor shortage is a common concern for all administrative organizations, so local governments from various regions interested in our attempts are commissioning us for inspections and lectures. Video interviews can be conducted in any region, but I believe that it would be especially useful for local governments located far away from the city center. Since it would be cumbersome for them to come a long way to our city, we are considering using the video interview method to have inspections online.

The duration time for video interviews is designated by the city—but in the future we would like to respond flexibly to applicants’ requests for the duration of interviews in order to eliminate constraints not only in terms space, but also in time.

In what ways do you believe that pioneering attempts like adopting LINE WORKS will help Shijonawate?

For administrative tasks dealing with confidential information, we use a separate network from the Internet; but if we overhaul communication infrastructure in the future so that we can connect to the Internet securely, I believe that we will be able to utilize chatting tools like LINE WORKS among staff. I often go on business trips outside the city, and I think that work efficiency will be significantly improved if I can sign or approve documents outdoors. The fundamental role of the staff is to listen to the citizens and solve with imagination and creativity the problems to which viable solutions do not exist.

For civil servants, increasing the efficiency of daily work to ensure enough time to talk with the citizens is “Work Style Reformation” itself, and as a means to achieve this goal we would like to reduce overtime and conduct telework. If IT tools serve as an effective means to get to this goal, we will continue to actively incorporate them.

※All details, affiliations, and positions specified were gathered at the time of interview.