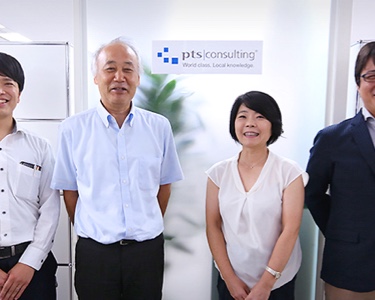 PTS consulting Japan Corp. provides a variety of global consulting focusing on office-related infrastructure consultation, introduction support, and subcontract. The company is utilizing LINE WORKS with the aim of sharing information with the employees since 2/3 of the staffs are dispatched to the client companies. We interviewed President Mr. Kojima, Ms. Susa, Mr. Kudo, and Mr. Horiuchi about how could they resolve the problems which they faced before the introduction with LINE WORKS.

Tell us about your company and individual roles

We are a consulting company based in UK. We are carrying out global and neutral consulting business focusing on architecture, office transfer, and IT. We are mainly responsible for infra systems and its related projects which are the base of the enterprise as well as strategy and project management, introduction and management for daily tasks. The scope of our work ranges from IT, and facilities to audio visuals.

One of our strengths is that we can suitably make response to the IT-related construction projects. When creating a data center or server room, we also provide consulting services on ordering or managing the budget for vendor companies.

What were the issues before the introduction of LINE WORKS?

Since 2/3 of our employees reside and work at client companies, communication with those employees were not fluently made than we expected. Also, because of those employees who are residing at the client companies use the email domain of the client, they had to login to our company account with other electronic device to check the internal emails. With the tendency of checking the business-related email first, instead of checking the internal email, the employees could not answer to internal emails promptly. It is true that we have global information portal sites, which are commonly used by our employees. However, since its major language was English, it was hard to use the tool in Japan.

We also used Skype or SMS for internal communication. However, because each employee uses all of the different means of communication, they had to call each other if they had to make urgent contacts.

Until now, we have been renting out 2G phones to employees who reside outside the company. But, we changed the mobile device from 2G to iPhone recently. Based on its change, we came up with an idea that we should introduce a new tool to our company as well.

When using SNS which are commonly in use, we had to ask contact information to each employee. With LINE WORKS, however, we could find out the contact information of all the employees even without asking for them. It was appealing for us to be able to start with the least explanation on the first introduction of the LINE WORKS since it has same method of usage as the LINE, which is used by as many people as the infrastructure of society already. When introducing the tool, it was almost mandatory to make usage guide or manual of the newly introduced tool. However, there was no need for us to make documents on the tool when introducing LINE WORKS. We found shortening of such unnecessary work was great benefit of LINE WORKS.

We have went through several tools. But, we chose LINE WORKS because it is easily adopted, provides service with low cost, and employees were already used to its usage. In fact, no inquiry was received from the employees on the very first day of the introduction. We thought that employees were not using the tool well. We even worried and considered further about the utilization of the tool. Yet, we soon found out that all the employees were already got accustomed to the tool, and therefore, there was no question drawn from the users.

How does the internal communication at your company changed after the introduction of LINE WORKS?

It has become easier for us to communicate with the employees dispatched and working the client office. Until now, communication has been inconveniently held since the employees were using different communication tools. Specifically, we had the employees who mentioned that they ‘have not read the internal PTS emails’ or there were the employees who are reachable through Skype and vice versa. After the LINE WORKS introduction, it became clearer to find the right person to contact. Also, even though we do not receive the response in a prompt manner, we can assure that the message was read through ‘Read’ notification.

Being able to handle the problem immediately is another point which has improved. For example, there are at times when the employees dispatched to the client office. sometimes accept the offer which goes beyond its original scope of the work and as a result, it gets harder for field workers to handle the issue. Even in that case, we can quickly receive contacts regarding the issue and manage it. We did not even know that there was a problem in the past. So, we believe that there were a lot of cases when the employee handle the problem alone. As can communicate under the better circumstance, the volume of the communication has increased as well as clarity of the conversation has improved.

How does the internal communication at your company changed after the introduction of LINE WORKS?

We often have communicate with the employees stationed at the client office using the group chatting room made by team basis. In some cases, one manager take on a number of projects and its members. By creating groups on a project basis, manager can both manage the project and share information much easier than before. Also, we are writing contents what is called ‘Monthly report’ on the board such as notice on the virus or company news using Home feature. On company news, we publish contents like internal office event or introduction of the hard working teams and so on. By frequently sharing such news, we are reinforcing the employees’ sense of belonging to our company, even though they are working outside the office.

We are frequently using the chatting room made by project basis. Because most of our work is with regards to office infrastructure, we are mostly using the chatting room when sharing photos taken at the field and ask our engineers for opinion. It is convenient since we can share the situation immediately. If we only communicate through texts, there is possibility of communicate partners feel offensive during the conversation. Using stickers, however, we can also express our feelings and emotions, which enabled us to share messages smoother than before. Of course, foreign employees have naturally been using the tool as well.

How do you want to utilize LINE WORKS in the future?

Basically, it is the field with high mobility rate of the labor and most of the employees are dispatched to clients’ office, it is inevitable for them to have low sense of belonging to the company. We are hoping to increase the sense of unity for the entire company by actively carrying out company vitalization policies such as company news, events or even clubs with LINE WORKS. We would also like to use LINE WORKS for individual human resource supports.

We would like to introduce usability of LINE WORKS to as many employees as possible. We also want to develop a bot which handles company FAQ.