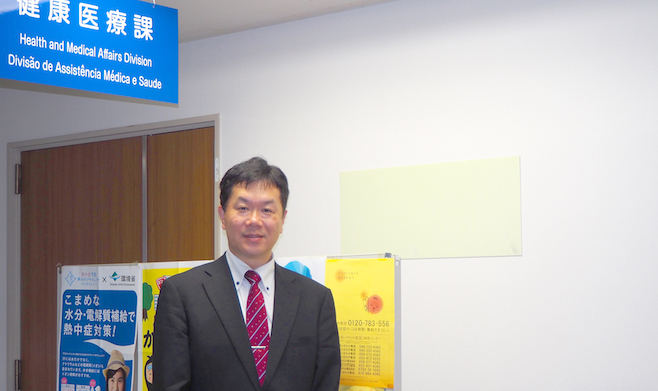 Hamamatsu City, Shizuoka Prefecture of Japan, is actively reviewing the medical aid system in preparation for tsunami caused by Nankai megathrust earthquakes. We adopted LINE WORKS to solve the problem of lost connectivity in the event of a disaster; previously, we had a telephone and wireless system as only available communication means. In this sense, we could witness a significant change when heavy rain in West Japan and large-scale blackout stroke. We interviewed Mr. Nishizaki from the Health and Medical Division of Hamamatsu City Office and Professor Yoshino, an emergency/disaster medicine specialist, about the process of introducing LINE WORKS and changes that came afterward.

Please tell us about your roles and responsibilities

I take part in managing the medical policies and disaster medical treatment. Specifically, my responsibilities include implementing measures for the emergency medical system and preventing cancer and suicide. Therefore, I communicate with medical, dental, pharmaceutical, and other related associations regularly.

Currently, I oversee comprehensive disaster prevention and medical drills and act as a key medical aid liaison by improving the means of information exchange and strengthening collaboration among several medical institutions and organizations. Moreover, I monitor Nankai megathrust earthquakes activities in case a tsunami rushes in. Hamamatsu city covers extensive coastal and mountainous areas; therefore, we review the medical aid system based on such regional characteristics.

How did you deliver information in the event of a disaster?

Our city was equipped with fax machines, emergency wireless communications, and satellite mobile phones as a means of delivering information to medical institutions, and emergency aid centers in the event of a disaster. Unfortunately, we became well aware after Tohoku and Kumamoto earthquakes that the existing communication methods could not provide seamless and immediate information exchange that we need.

When the Tohoku Earthquake occurred, our city also sent the support team but experienced unstable connections due to consecutive aftershocks and had difficulty communicating with them. During the Kumamoto Earthquake, we tried using radio and e-mails, in both PC and mobile settings, but nothing seemed to work.

All of the contact systems of medical institutions that we knew in our city were fixed-line phones. Thus, in September 2018, it was challenging to get the disaster information after a typhoon disconnected the entire phone line. We did have an alternative – to use a satellite mobile phone. However, the method requires considerable skills to operate and have critical disadvantages: it only has one line, and redialing is exceptionally complicated. In this sense, we might not be able to deliver the essential missing details from the first call. Furthermore, there are also issues with misunderstanding with audio delivery and time, as the information can only be provided to people on the phone.

Is there a reason why you considered establishing a network that includes medical institutions?

When the Great Hanshin earthquake took place, there was a significant discrepancy in the accommodation capacity of medical institutions. Indeed, some had plenty of room for accommodating patients while the others were full up to the limit; the unfortunate situation happened due to the lack of interconnected communication platform. In times of Kumamoto earthquake, the hospitals suffered physical damage and also the chaotic condition of not knowing where to transfer hospitalized patients. Based on these experiences, I felt a strong need to interconnect medical institutions.

We reviewed the establishment and empowerment of the network to save as many citizens as possible amid large scale disasters. At first, we decided to establish the disaster medical information network within medical institutions that may have a critical impact on patients’ life in times of power outage: emergency hospitals, dialysis, and perinatal systems.

Why and how did you introduce LINE WORKS?

There were reports on how LINE was helpful in sharing information during the Kumamoto earthquake. With that in mind, we tested LINE WORKS during a medical aid training at the end of October 2017- the result was more than satisfactory. All satellite mobile phones and wireless emergency communications are limited to verbal interactions. However, we could save and access text messages with LINE WORKS. We believed that in a disaster situation, it would be helpful to have access to the text messages for later without checking immediately. Moreover, we were drawn by how the network included many medical institutions and people outside of Hamamatsu city; this allowed us to know which medical institution had access to the sent information.

The fact that we can easily send photos with LINE WORKS contributed to its implementation as well. During a large-scale earthquake, we can send the pictures of the medical aid box within the emergency aid center to let partners know which medical supplies are needed promptly and accurately.

LINE WORKS allows the admin to build systems. Our management staff can apply set rules and easily customize groups, names, and icons according to need. It also helped us build a network significantly since we could manage and distribute accounts and passwords to each medical institution. Such a management system is not attainable with LINE alone.

Could you explain in detail about how you use LINE WORKS?

In June 2018, LINE WORKS was formally proposed at the open network meeting and was introduced in July of the same year. Currently, IDs are issued from each institution, and the ones in use amount to approximately 180.

There were two cases that we put LINE WORKS into the field use. The first was the Heavy rain of July, Heisei 30 that occurred in July 2018. Hamamatsu city’s support team was dispatched to Hiroshima Prefecture and formed a group consisting of 30 related personnel via LINE WORKS. Information exchange was streamlined as we could share information reported in our city and receive the details of the situation of the actual site.

The second was the large-scale power outage caused by the influence of Typhoon 24 on September 30th, 2018. On the early morning of October 1st, Professor Yoshino, who was in charge of the disaster medical coordination in Shizuoka Prefecture, contacted me about the need to prepare for the disaster. Therefore, our city office urged each medical institution to enter the current state of damage in the EMIS (Emergency Medical Information System established by the Ministry of Health, Labor, and Welfare) via LINE WORKS. We were also able to input damage condition info in place of institutions that were not capable on their own; we would receive the updates on damage status to fill in the EMIS with LINE WORKS. By October 1st, the smooth connectivity among all parties enabled us to grasp most of the power outages of medical facilities in the city.

We were glad to achieve responsive communication through LINE WORKS and prevent the worst scenario of not knowing the damage information properly. Notably, it was beneficial to seamlessly collect the damage information from gynecology, dialysis, and psychiatry facilities; such institutions were vulnerable to the adverse effects of a blackout on patients. Furthermore, we would provide each medical institution of the information about power outage situations and priority plans collected by the Shizuoka Prefectural Government. Simultaneously, medical facilities would share their condition and availability to take patients. Thanks to LINE WORKS, we could quickly identify and make lists of medical institutions experiencing a power outage and request early power restoration to the Hamamatsu City Office Crisis Management Division. Also, the electric power company could start the immediate restoration process with the given lists.

What has changed since the introduction of LINE WORKS?

Hamamatsu City Office is now better equipped on disaster management and has a higher level of emergency preparedness. When a disaster strikes, our city staff and medical personnel need to change the stance as if turning a switch instantly. With the help of Professor Yoshino, we were able to turn the responsive switch promptly. We could take action early in the morning by contacting medical institutions to figure out conditions.

It felt great to connect with medical institutions with LINE WORKS rather than a call that did not work. I believe that group chat feature brought a positive change by creating a communication hub to share information among gynecology, dialysis, and psychiatry facilities. If we cannot divide them into groups, we might be confused, bombarded with irrelevant info.

How do you plan to use LINE WORKS in the future?

We want to fortify the close ties among Hamamatsu City Office and medical facilities for the city’s mission: preventing the dispersion of contagious diseases during a disaster. Also, with LINE WORKS, we believe that the Hamamatsu City Health Environment Research Center can deliver recent epidemic disease reports or carry out training against infectious diseases. The research center already publishes the report on the epidemic diseases study. Lastly, we look forward to promoting the engagement within the network further as well.