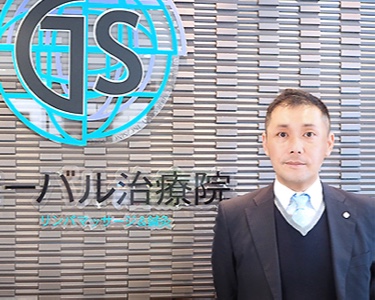 Centering ‘Temomin’, which cultivated massaging as more common culture through reasonable price, Global Sports Medical Research Institute manages about 180 branches nationwide, with 6 different types. The company is utilizing LINE WORKS as a means of information sharing and requesting for staff resources within branches. We interviewed Mr. Kurosawa and Mr. Ishi about the decisive reason for LINE WORKS introduction as well as benefits afterward.

Tell us about your company and individual roles

After opening the first store called ‘Temomin’, which provides service with an affordable rate system of 1,000 yen per 10 minutes, the company is currently managing about 180 branches nationwide, with 6 different types. I am Director of this company and also General manager at the System Solution Department.

I work for both Financial Accounting Department and System Solution Department. I took part in LINE WORKS introduction this time.

What were the issues before LINE WORKS introduction?

In our company, there is a lot of business contact made between the store managers and staffs. We used to use personal email or LINE in addition to the phone calls before. For this reason, we were all worried about company information security and therefore, wanted to properly manage the issue.

The branch managers mostly contact one another asking for the support. Further, in our company, when manager cannot handle the customer request with available staffs at the branch, the manager request support to the other branches, in which both closely located and have available time.

When asking for support, we first checked the systemically shared reservation list of each branch. After that, we either sent emails or made phone calls to the branches we think available to support our branch. This way, however, was very much inefficient and took a lot of unnecessary time. For this reason, we were all thinking about other option to contact other branches other than this.

We have considered using the cloud-like systematic groupware, which headquarters staffs were using at the moment. We soon found out that it is impossible to expand its utilization up to company-wide due to its high cost. Other than groupware, we also considered chatting tools as well as SNS. However, those tools were imperfect in certain ways. Specifically, security as well as admin feature of those tools were unstable to implement it as the group communication tool. Even if we have decided to implement a new tool, we still worried about if it would be too difficult for us to introduce the tool to the employees. That is because we already have went through several experience in failing the introduction of communication tool since we have employees with low IT literacy.

I first encountered LINE WORKS with its subway advertisement, and soon interested in the tool. At the same moment, our CEO offered me about introducing LINE WORKS to our company. As a result, we started to use LINE WORKS with the free trial version.

Although LINE WORKS is paid service, we found the tool very attractive since it offers service with reasonable price. The tool which we used to utilize was so expensive that we could only provide the accounts to either executives or the employees with high position within our company. However, we expected that, with LINE WORKS, we may provide the accounts to those branch managers and even to the staffs at each branch. Also, because the usability of LINE WORKS is similar to that of LINE, we believed that all the employees could use the tool without feeling burden about its usage. And with this idea, we promoted a concept ‘Let’s use LINE WORKS when emailing at the field’ to our company.

LINE WORKS is being used mainly for the manager of each branches. Most of them are using LINE WORKS with the smartphone which the company rented out. When asking for support, the manager can send message, asking ‘can you send ○ staffs at ○’o clock to our branch?’ to the number of message rooms created based on the location. This way, the manager can send the message to other branch managers simultaneously. Since branch managers as well as area manager are all in one chatting room, there is no need to contact each for scheduling. Also, the manager can make contact everyone at once. Unlike making phone calls, we all can instantly check and reply to the message received. Therefore, asking for support as well as finding the available staff can be held smoother than before.

Further, we used to have not personal-level but the branch-level email accounts, it took a great amount of time communicating with one another. After the introduction of LINE WORKS, however, we can work in a smoother way as LINE WORKS enables us to directly contact and receive the response from the person. We sometimes use Calling feature when making business contacts.

Branch managers share photos of their branch displays and POPs and use them for future reference. Photos of potential building options for newly launched branch or the photos to check cleaning condition are also shared through LINE WORKS message. Easy photo sharing UI of LINE WORKS is very attractive.

What are the effects after the introduction of LINE WORKS?

After the introduction of LINE WORKS, we have been able to both receive the responses and coordinate the schedule within 5 minutes. What is noticeable is that the same process required 10 to 20 minutes to process in the past. Requesting for support is the most important for store management, and smoothness of its process is the biggest change made after the introduction of LINE WORKS. Along with the speed, LINE WORKS also broadened our communication range. In the past, the schedule coordination could only be held in between limited number of branches since we had to call each branch asking for the support.

With LINE WORKS, however, we are able to send requests to the branches located throughout the region at once. In addition to ‘Temomin’, we are able to request support for ‘Global therapist’ as well. This implies that the supporting system has established above and beyond the region. Also, we think that the chances of not getting the reservations due to lacking its support have also decreased.

As we are utilizing LINE WORKS, we could receive more reservations from our customers. As the chances of not getting the reservation have decreased, we believe that LINE WORKS has contributed to our company with regards to increase in customer satisfaction rate as well as increase in company revenue.

LINE WORKS is receiving positive opinion from the field staffs such as ‘it is easy to use’ and ‘it does not take as much time as email, and therefore, feeling comfortable using it’.

With LINE WORKS, sending ‘Okay’ to the communication partner is enough as a response. Because we can find out whether communication partner read the message or not through ‘Read’ notification, overall LINE WORKS communication can be held in much comfortable manner. We also think that communication within employees became much serious and valuable. After the introduction, we think that the chances of branch managers to communicate one another have also increased. As they can casually discuss about issues such as operational rules of the branches, the revenue goals of each region, or even about their personal condition and staff schedules, active information sharing is possible.

Such flawless introduction of LINE WORKS implies that field staffs were longing for the tool such as LINE WORKS. Although LINE WORKS is activated to only those branch managers for now, but we are planning to provide accounts to those staffs. With this, we are expecting active company communication near in the future.

Unlike email, which general communication atmosphere is formal and firm, LINE WORKS enables us to have friendly communication. Up until today, field employees could not raise up their voice for the idea and opinion.

However, from now on, we would love to encourage them to speak out for their opinion. By utilizing various functions inside the LINE WORKS, we are expecting to make field atmosphere much more active and joyful than before.